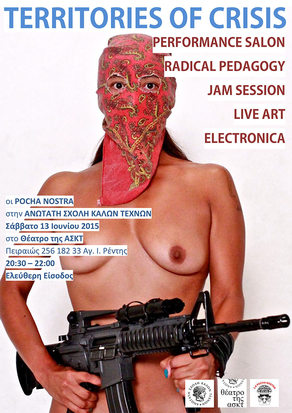 “TERRITORIES OF CRISIS” FROM LA POCHA NOSTRA
PERFORMANCE SALON / RADICAL PEDAGOGY / JAM SESSION / LIVE ART / ELECTRONICA
Athens School of Fine Arts.
Saturday, June 13, 2015 at the Theater of ASFA
256 Peiraios St. 182 33, Rentis. 8:30-10:00 PM
Pocha troupe core members Gomez-Pena, Michèle Ceballos and Saul Garcia-Lopez, with Pocha Associates Jess Balitrónica, Predrag Predjac and Fotini Kalle (our local producer) and our local host Vassilis Vlastaras from the Athens School of Fine Arts cordially invite you to view the high / low / sidelights, and close-ups from the 2015 Pocha Nostra International Summer Workshop.
Witness capitalist demons, pagan saints, social monsters, radical bohemians, and other wild live images at our indoors / outdoors live jam sessions hosted by the
The night will feature performances in process by rebel artists from nine countries, three generations & multiple disciplines. This is the culmination of two weeks of radical performance exercises conducted by the infamous performance troupe La Pocha Nostra. Join us for a glimpse into a radical pedagogical process featuring experimental improvisation, bizarre rituals, body/text imagery and wild live art actions.
Founded in 1993 La Pocha Nostra is an ever morphing trans-disciplinary arts organization based in San Francisco with branches in many other cities and countries.
Every summer since 2004 the legendary performance troupe La Pocha Nostra conducts a nomadic 12 day intensive performance art workshop on performance art with a focus on the human body as a site for creation, reinvention, memory, and activism. For the first time ever this cross-cultural, inter-disciplinary and multi-generational workshop takes place in Greece, and involves a curated group of more of 25 rebel artists coming from Mexico, the US, Greece, the UK, Australia, Finland, Canada, Germany, and Spain.
The Pocha workshop is an amazing artistic and anthropological experiment in which carefully selected artists from several countries and every imaginable artistic, ethnic and sub-cultural background begin to negotiate common ground. Performance becomes the connective tissue and lingua franca for our temporary community of rebel artists.

Bodies/Sounds/Instruments:
​Lab and discussion on gender, sounds and acts.

Coordination: Kostis Stafylakis
This project will study, debate and test concepts and strategies of gender, drag, queer, cyborg and re-appropriation. Procne & Philomela will present a passive-aggressive drama with electronic and natural sounds. Glamorous2be return with a new performance after their get-away. F78 from FYTA and Elena Poughia will discuss the resent “Soundacts” festival, queer and sound. Kostis Stafylakis will underpin aspects of anti-humanism in relevant topics and will contribute to an in situ production of an exhibition with sound actions.

ΦΑΡΜΑΚΟΝ
by The group ERROR
Thursday 4 June 2015
21:30
Athens School of Fine Arts
design hall of ASFA, 256 Peiraios st. (Γυμνό νυκτός)
ΦΑΡΜΑΚΟΝ (FARMAKON) is an improvisation that incorporates techniques of virtual reality, video games and algorithmic music in conjunction with musicians, performers and the audience. It constitutes an improvised performance of new technologies and primordial acts.
With the artists guiding us through a real-time journey in virtual spaces as the backdrop, using archive photos, sound installations and controlled lighting, an environment is created where the musicians, a singer, an actor and the audience are required to perform in rapport with (or against) it.
On the one hand, conceptually this work is based on the dynamics gained by medicines (ΦΑΡΜΑΚΟΝ) during our time: powerful industries that hold even the copyrights of biological grafts. A small quantity of concentrated high technology, a construct that is directly related to the body and which tends to alter the substance of its physical life. On the other hand, ΦΑΡΜΑΚΟΝ refers to the philosophical term first proposed by Plato in Phaedrus, to explain Writing against the Authenticity of Memory, is used by Derrida later on through a dense and self-referenced text on philosophy (Plato’s Pharmacy).
G-8HG6XY2LQM